0. Introduction
In 2012 I became interested in the interaction between the USD BTC price and the bitcoin network hashrate. I posted a series on the subject, and then followed up with a weekly hashrate forecast estimate until it was clear that the original (and the eventually updated) dynamic linear model was no longer valid because there no longer seemed to be a predictive relationship between price and the network hashrate.

1. Does price still lead difficulty?
After the last twelve months' consistent increase in the network against the equally consistent and  long-term reduction in the bitcoin price I found myself wondering if there was a new predictive linear relationship between price and hashrate. 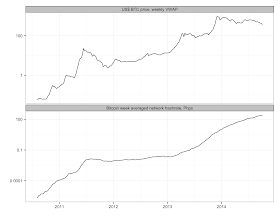 However, it's not too hard to make sure. A cross-correlation function (good information here and here) plot from the first month MT GOX started trading until two years ago (when I first estimated the dynamic relationship between price and hashrate, and one from two years ago until now: 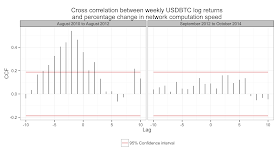 The difference is stark. The original CCF shows a strong relationship between the weekly percentage change in hashrate and the weekly log return at between five and zero previously, which suggests a dynamic relationship existed at the time. The current CCF shows no such lagged linear relationship.

2.When and why the predictive linear relationship end?

Perhaps a bandwidth of two years is too great to see price beginning to lead the network hashrate again? I created a heat-map of CCFs but it looked a little messy. The animation below is much clearer.

The CCF shows that price ceased having a linear leading relationship with the network hashrate in late 2012. Something in the fifty-two weeks from late 2011 to late 2012 changed - prior to the availability of ASICS.

The "why" is much harder to determine. It is true that no ASICs were available at the time that the cross-correlation became insignificant, however spending on GPUs probably decreased as people pre-paid for ASIC miners.

This could have had the effect of reducing the network hashrate even as price increased since the money invested (as a response to the increase in price) would not go on-line until after February 2013, after which the ASIC wave begins.

Many ASICs have a non-determinate delivery date, so we would expect to see the hashrate increase to be steady and continue for a long period of time as miners attempt to pay for their devices.

Finally, we expect to see an order of magnitude plateau in the network hashrate once further improvements in ASIC technology become incremental. Mining income becomes less dependent on a particular manufacturer and more dependent on access to cheap electricity. At that point a relationship between price and hashrate may once again occur, but I doubt it - there are too many mining farms with too much invested to simply shut down if the price dives.

3. So does price lead difficulty?
I think it must, from an economic point of view, however I can no longer prove that, and it's not clear what that predictive relationship might be.

I would expect there to be a non-linear dynamic relationship between price and hashrate (where price leads hashrate) to occur at all times, depending on variables such as BTC price, electricity price, ASIC price, ASIC efficiency, percentage of the network, percentage of the network  being run by large farms or affected by hot weather, and other variables I haven't thought of. There will also be one-off 'shock variables' (such as slash-dotting) which are difficult to quantify and model.

The USD BTC price by itself has become a poor predictive variable, however the network hashrate can still be forecast - rather than spend time attempting to incorporate multiple variables in a complicated way, you could try using a single variable autoregressive model. They are much are simpler, well understood and have been quite successful for me in the past. Think of them as a sort of trend-line on steroids.

organofcorti.blogspot.com is a reader supported blog:


Find a typo or spelling error? Email me with the details at organofcorti@organofcorti.org and if you're the first to email me I'll pay you 0.01 btc per ten errors.

Please refer to the most recent blog post for current rates or rule changes.

I'm terrible at proofreading, so some of these posts may be worth quite a bit to the keen reader.
Exceptions:
I write in British English. 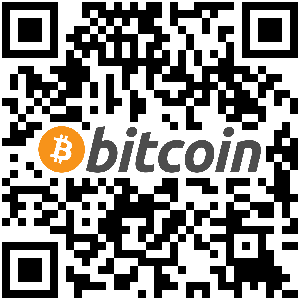